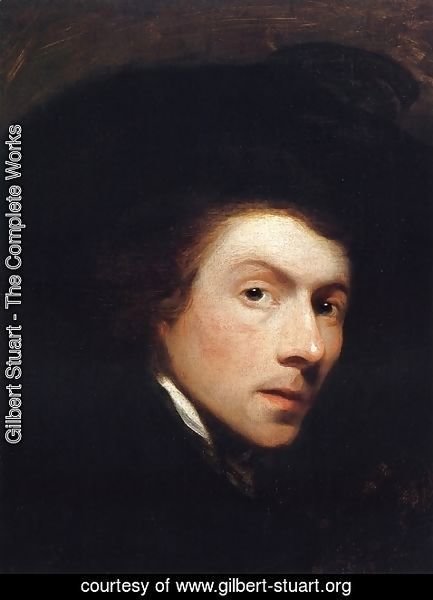 Gilbert Stuart was born in Saunderstown, Rhode Island in 1755 and baptized at Old Narragansett Church. He was the third son of Gilbert Stewart, a Scottish immigrant employed in the snuff-making industry, and Elizabeth Anthony Stewart, a member of a prominent land-owning family from Middletown, Rhode Island. Stuart's father worked in the first colonial Snuff Mill in America, which was located in the basement of the family homestead.

Gilbert Stuart moved to Newport, Rhode Island at the age of seven, where his father pursued work in the merchant field. In Newport, Stuart first began to show great promise as a painter. He was tutored by Cosmo Alexander, a Scottish painter. Under the guidance of Alexander, Stuart painted the famous portrait Dr. Hunter's Spaniels, which hangs today in the Hunter House Manison in Newport, when he was 12-years-old.

Stuart moved to Scotland with Alexander in 1771 to finish his studies. His mentor died in Edinburgh the following year. Attempting briefly and without success to earn a living as a painter, he returned to Newport in 1773.

Stuart's prospects as a portraitist were jeopardized by the onset of the American Revolution and its social disruptions. Following the example set by John Singleton Copley, Stuart departed for England in 1775. Unsuccessful at first in pursuit of his vocation, he then became a protege of Benjamin West, with whom he studied for the next six years. The relationship was a beneficial one, with Stuart exhibiting at the Royal Academy as early as 1777.

By 1782 Stuart had met with success, largely due to acclaim for The Skater, a portrait of William Grant. At one point, the prices for his pictures were exceeded only by those of renowned English artists Joshua Reynolds and Thomas Gainsborough. Despite his many commissions, however, Stuart was habitually neglectful of finances and was in danger of being sent to debtors' prison. In 1787 he fled to Dublin, Ireland, where he painted and accumulated debt with equal vigor.

Stuart returned to the United States in 1793, settling briefly in New York City. In 1795 he moved to Germantown, Pennsylvania, near (and now part of) Philadelphia, where he opened a studio. It was here that he would gain not only a foothold in the art world, but lasting fame with pictures of many important Americans of the day.

Stuart painted George Washington in a series of iconic portraits, each of them leading in turn to a demand for copies and keeping Stuart busy and highly paid for years. The most famous and celebrated of these likenesses, known as The Athenaeum, is currently portrayed on the United States one dollar bill. Stuart, along with his daughters, painted a total of 130 reproductions of The Athenaeum. However, Stuart never completed the original version; after finishing Washington's face, the artist kept the original version to make the copies. He sold up to 70 of his reproductions for a price of US$100 each, but the original portrait was left unfinished at the time of Stuart's death in 1828. The painting now hangs in Boston's Museum of Fine Arts.

Another celebrated image of Washington is the Lansdowne portrait, a large portrait with one version hanging in the East Room of the White House. During the burning of Washington by British troops in the War of 1812, this picture was saved through the intervention of First Lady Dolley Madison. Gilbert painted 12 versions of the portrait throughout his life. Most of the U.S. states feature a copy of the painting hanging in their state capitol. In 1803, Stuart opened a studio in Washington, D. C.

Stuart moved to Boston in 1805, continuing in critical acclaim and financial troubles. In 1824 he suffered a stroke, which left him partially paralyzed. Nevertheless, Stuart continued to paint for two years until his death in Boston at the age of 72. He was buried in the Old South Burial Ground of the Boston Common. As Stuart left his family deeply in debt, his wife and daughters were unable to purchase a grave site. Stuart was therefore buried in an unmarked grave which was purchased cheaply from Benjamin Howland, a local carpenter. When Stuart's family recovered from their financial troubles roughly ten years later, they planned to move his body to a family cemetery in Newport, Rhode Island. However, since his family could not remember the exact location of Stuart's body, it was never moved.

At present there is some debate as to the identity of the sitter for one of Stuart's unfinished portraits. In 1878 "John Bill Ricketts" was identified by George Washington Riggs, also known as "The President's Banker," and trustee for the Corcoran Gallery of Art in Washington, D.C., as "Breschard, the Circus Rider" and as ""Breschard" was publicly displayed at the Museum of Fine Arts, Boston, in 1880.[21] In 1970 the National Gallery of Art changed the identification from "Breschard" to "Ricketts" and to this day the NGA has failed to explain the reason for this identity change. 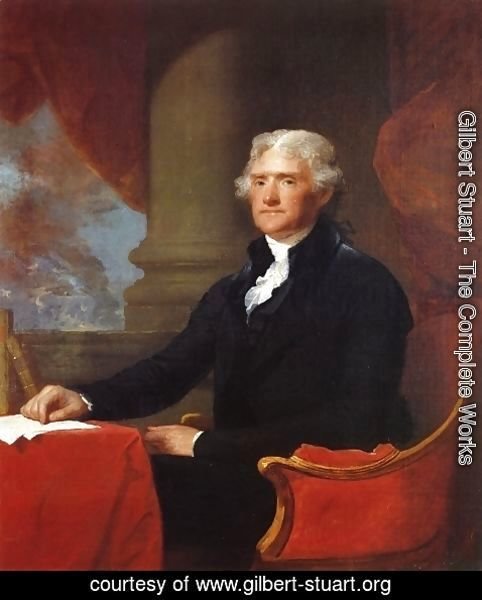 By the end of his career, Gilbert Stuart had taken the likenesses of over one thousand American political and social figures. He was praised for the vitality and naturalness of his portraits, and his subjects found his company agreeable: Speaking generally, no penance is like having one's picture done. You must sit in a constrained and unnatural position, which is a trial to the temper. But I should like to sit to Stuart from the first of January to the last of December, for he lets me do just what I please, and keeps me constantly amused by his conversation. - John Adams

Stuart was known for working without the aid of sketches, beginning directly upon the canvas. This was very unusual for the time period.

His works can be found today at art museums throughout the United States and Great Britain, including the Metropolitan Museum of Art in New York City, the National Gallery of Art in Washington, D.C., the National Portrait Gallery in London, and the Museum of Fine Arts in Boston.

Today, Stuart's birthplace in Saunderstown, Rhode Island is open to the public as the Gilbert Stuart Birthplace and Museum. The museum consists of the original house Stuart was born in, with copies of paintings from throughout his career hanging throughout the house. The museum opened in 1930. (From Wikipedia)